Part of the field of computer vision is image restoration, which involves the removal of artifacts and noise from an image. This is especially applicable in medical imaging, where images are highly structured and image acquisition is difficult and expensive. The cost and size of a medical imaging system is frequently proportional to the amount of measurement data gathered. Thus, there is a high demand in the field of medical imaging for the development of reconstruction methods that can perform well in the absence of fully sampled data. Variational neural networks (VNNs) have recently seen success when applied to 2D magnetic resonance imaging (MRI) data. The considered project will be extending a variational neural network to 3D and applying it to an imaging system with a highly ill-posed system matrix. The contributions of this project are as follows: 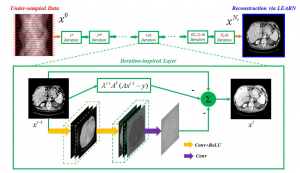 The LEARN network was modified to be 3D by expanding the convolution portion to 3D kernels.